When first introduced in 1911, the Agricultural Education program at Iowa State University had one primary focus — to develop a comprehensive curriculum that would help prepare future agricultural teachers for a successful career.

One hundred years later, that same dedicated focus has propelled this nationally ranked program into becoming one of the nation’s most recognized academic settings for aspiring Ag-Ed teachers.

Through its constant efforts to monitor and evaluate what students need in order to be best prepared for their future teaching careers, this historic program has made a name for itself in its continuous push to provide students with one of the most up-to-date curriculums in the country.

Therefore, when recent evaluations uncovered a growing number of graduating Ag-Ed students feeling unready to effectively teach the essential Ag-mechanic trades such as construction, engine repair, and welding, there was no surprise that administrators of the program reacted quickly to find a solution.

“We were seeing that many of our agriculture teachers who were going out to start their teaching were feeling unprepared to teach an Ag-mechanics class,” explained Dr. Ryan Anderson, assistant professor and director of undergraduate studies for the program. “And by that, we felt we were setting ourselves up for trouble by sending out untrained teachers.”

Within months, Dr. Anderson and other faculty members had developed a new, in-depth Ag-mechanics course that would help provide current students with training and development they needed to be prepared for various skilled trades seen within the agricultural field.

“My biggest concern was that almost all of my students had very little experience with welding, and it was one of the subjects they seemed most nervous about,” claimed Dr. Anderson. “So I was looking for a solution that would help me reduce the fear and anxiety of welding and help speed up their learning curve.”

Once purchased, Dr. Anderson quickly recognized the impact that the advanced capabilities of the VRTEX® 360 would have in his classroom. 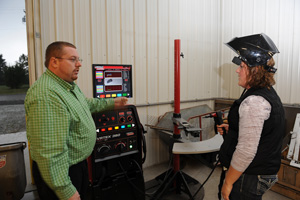 With its innovative optics and motion tracking technology, the VRTEX® 360 easily allowed Dr. Anderson’s students to fully immerse themselves into a realistic welding environment. From there, students could practice and perform unlimited GMAW and SMAW welding processes without the fear of making mistakes.

To Dr. Anderson though, the most significant benefit provided by the virtual arc welder was to help new students realize the strict attention to detail necessary to produce clean and effective welds.

“The biggest thing was the instantaneous feedback the students received to pinpoint exactly what problems they were facing.” stated Dr. Anderson. “The VRTEX® 360 forced the students to use the correct settings and think about the thickness of the metal, what position they are in, and what type of weld they are doing; they could not just go up, pull the trigger, and weld.”

Graduate assistant Preston Byrd, who played a key role in assisting Dr. Anderson with integrating the VRTEX® 360 into the courses, was also quick to see the benefits the virtual reality arc welder offered. “Since most of the students had little previous welding experience, we saw that the VRTEX® 360 taught them the proper psychomotor skills before they had to transfer them over to the actual welder, saving us time, material and welding consumables.”

But Byrd insisted that it wasn’t just the realistic welding simulation provided by the VRTEX® 360 that helped the students. Since the virtual weld training system could safely be used in a classroom setting, Dr. Anderson and Byrd were able to speed up students’ learning curve by presenting a realistic welding process directly to all the students at once.

“One thing that helped was the ability to hook the system up to an overhead projector, so when a student welds, the whole class can watch and discuss the student’s process,” He explained. “So now we can introduce skills to the whole class instead of going to each booth and doing it student by student.”

And the students agree. Caitlin Wessel, a senior in ISU’s Ag-Ed program, was one of the many students who entered Dr. Anderson’s class with very little welding experience. Yet, with the help of the VRTEX® 360, Wessel was easily able to overcome her apprehension of welding.

“When we began using the VRTEX® 360, it allowed me to get into a better comfort zone,” Wessel explained. “I was able to calm myself down and perform all the skills before I had to use them on the actual welder.”

Heather Anderson, an Ag-Ed senior as well, was also impressed by the advantages the virtual welder provided in helping her transition into welding.

“I never took welding in high school, so it was something completely new to me and I was scared of it truthfully,” she proclaimed. “ But now I have no fear in going up to the VRTEX® 360 and welding a couple of times, get my positions and speeds correct, without worrying about wasting consumables.”

But the benefits of the VRTEX® 360 didn’t stop there. It only took a few weeks of using the advanced training system before Dr. Anderson realized that the increasing interest in the virtual arc welder was bringing attention to the Ag-Ed program. Seeing more and more students inquire about trying out the VRTEX® 360, Dr. Anderson and Ag-Ed administrators quickly understood the large potential for a more dedicated skilled trades course to be added to the institute’s overall curriculum.

“The VRTEX® 360 has allowed us to expand our curriculum.” Dr. Anderson stated. “With the VRTEX® 360, we are actually now able to move into offering a more dedicated welding class, one that is going to be a skills-based course for all undergraduates.”

Now entering its second semester, both the VRTEX® 360 and Dr. Anderson’s Ag-mechanics class have made great strides in helping resolve students’ concerns over teaching skilled trades. So much so, that Dr. Anderson sees the VRTEX® 360 as a key part of the continued excellence of ISU’s Ag-Ed program.

With hopes that the VRTEX® 360 welding training system will help attract the younger generations drawn to the idea of virtual reality, Dr. Anderson looks forward to using the system as a crucial part of the program’s recruiting tools to advance ISU’s proud tradition of producing the nation’s next generation of skilled Ag-Ed teachers.