Virtual Welding Prepares High School Students for Welding Careers “While there obviously is still a need for actual arc time, the VRTEX® has eliminated a lot of the waste that was associated with this practice in the past.” 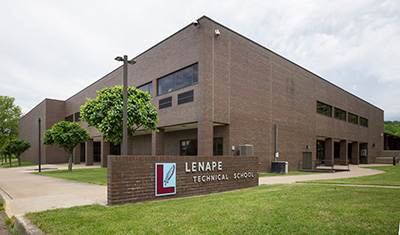 With enrollment steadily increasing, Lenape Technical School welding instructor, Ted Zablocki needed a more efficient way to train and test each of his students. He also wanted to enhance the high school welding program’s curriculum and technology so that students could be better equipped to graduate and easily adapt to today’s fast-paced welding shop environment. 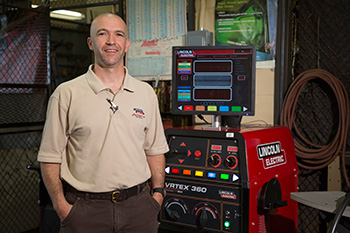 A VRTEX 360® from Lincoln Electric turned out to be the perfect solution for the school, which offers high school juniors and seniors a chance to learn about possible career paths before graduation. At the Armstrong County, PA. vocational school, students like Dustin Crissman learn real-life welding skills aimed at making them employable in today’s manufacturing job market – often developing abilities that are completely new to them. The senior had never welded before joining the program, but he knows he’s gaining valuable experience.

“It’s a skill I can use when I graduate,” Crissman says.

Crissman isn’t the only student who recognizes that he’s working toward a successful career. Enrollment in the welding program has increased since 2010, according to Zablocki.

“Three years ago, I had 12 students in my senior class. This year I have 16,” says Zablocki, who graduated from the program himself. “I expect to have a full house next year, which is 30. So I have 30 students looking at taking my program as juniors and seniors.”

Limited by the amount of workspace in the shop, Zablocki began looking for a way to accommodate his growing class.

Zablocki saw and operated a virtual reality welding simulator from Lincoln Electric at a trade show several years ago. He knew that such a machine could prove to be a valuable training tool for Lenape Tech’s welding students. Zablocki says he was further sold on the idea of adding virtual reality training to the curriculum after some of his students tested a VRTEX 360® from Lincoln Electric at a local union open house and raved about the experience.

So, Zablocki put the wheels in motion to acquire a welding simulator for the school. He contacted Lincoln Electric to obtain information and price quotes. He also applied for a grant to help defray the cost of the machine. After a competitive selection process, the State of Pennsylvania and Farmers & Merchants Bank of Western PA awarded Lenape an Equipment Grant. It took about a year, but Lenape was able to add a VRTEX 360® Virtual Reality Welding Trainer to their shop. And the effort has definitely been worthwhile.

Though initially some students were skeptical about using a virtual program to learn how to weld, they quickly realized that the machine could help them supplement their classroom and welding lab experience and to improve their skills.

“When it came to learning on the virtual welder, I really didn’t think it was going to be the same as actually welding,” said student Jesse Kane, who then gave the VRTEX 360® a shot. “Using it was pretty cool. It showed me how to hold everything the right way and where I needed to be, without getting burned.”

The students start by learning hands-on stick welding from Zablocki. Once they have worked on the SMAW process, they move on to the VRTEX 360®. Students use the system to train on both GMAW and FCAW processes, with at least four hours of virtual welding training required on each welding process.

Zablocki says there are numerous benefits to using the VRTEX 360® as part of the welding curriculum. Students work two at a time on the VRTEX®, so twice as many students can work on their welding skills. In addition, Zablocki says they grasp the tasks faster and increase comprehension on welding terminology, skills and immediate feedback.

“Many students start their GMAW/FCAW tasks, and I see that they pick up on the actual hands-on welding more quickly as a result of operating the VRTEX®,” he says.

The school has also seen savings when it comes to material.

“While there obviously is still a need for actual arc time, the VRTEX® has eliminated a lot of the waste that was associated with this practice in the past,” he adds.

Zablocki’s students complete about 10 fillet weld test plates with both sides welded and three welds per side during a two-hour session on the VRTEX®. During that same amount of time, a student could only complete two to three of the same tasks in a live welding booth. Virtual welding rather than live welding saves the school from having to supply material for each welding session. But that is not all, the saving on a virtual welding training system include less power requirements, no welding wire or consumables, no welding gasses, no fume extraction as well no scrap.

The students agree that training on the VRTEX® system has helped them gain needed skill and improve their confidence in a real welding booth, thanks to its authentic visual welding cues, welding sounds, and feel.

“It improved my weld, as in it showed me where I needed to be and how my weld would look when it was done,” Kane says. 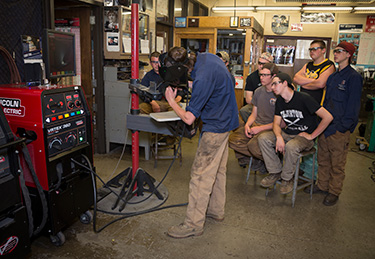 “The sound of the weld,” he explains. “If it sounds like eggs crackling, you know you’re doing something good.”

The benefits of the VRTEX 360® have expanded beyond the welding program. The VRTEX 360® is not only training welding students; the school has found uses for it in other departments, increasing the system’s versatility and long-term payback.

“We actually transfer this machine around to different shops in our school. So, they use it as well,” says Zablocki. “We send it to auto body, we send it to natural resource technology, and then carpenters will come over here and use it, as well. So, we’re not just teaching the students in welding how to operate this machine. We’re teaching future farmers, in a sense, carpenters, auto body students. The benefits aren’t just covering the welding program.”