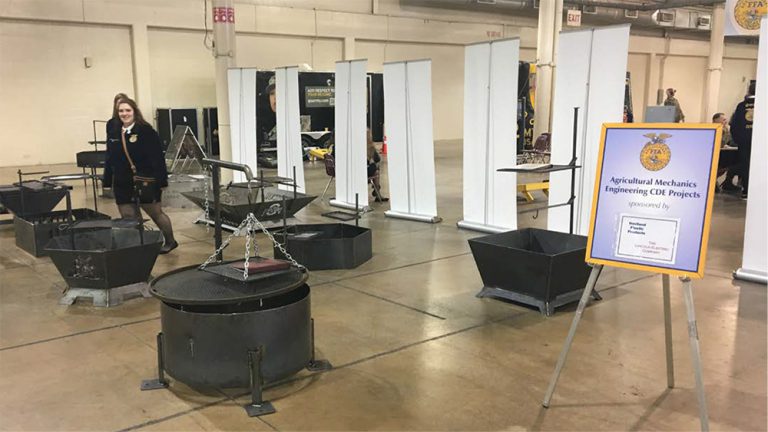 Completed fire pit projects from each team on display at the Ohio FFA Convention.

Every state FFA organization runs some form of Agricultural Mechanics Engineering CDE (Career Development Event) Project. The team responsible for the Ohio competition designed a program that runs a little differently than just about any other state.

Jason Keys, District Sales Manager, Columbus, at Lincoln Electric said, “There are an estimated 300 FFA chapters in Ohio and approximately 200 incorporate welding into their programs. Our goal was build a competition model that provided the students with a real working world experience.”

The Ohio team has worked to set up a multi-year program that started two years ago and will stretch over the next ten years. Per their vision, the competition took on a team project-based direction rather than a more traditional comparative welding skills competition. Teams of three members from high school FFA chapters across the state prepare an actual welded project that can be donated to a local community for placement in civic spaces like parks, civic centers and other community spaces. In this way, FFA and Lincoln collaborate on the competition to give back to local communities throughout the state.

Chris Gandee, Manager, Education Services, Lincoln Electric stated, “We have already identified twelve potential projects for the teams, which sets us up for using this approach over the next 10 years. All of the projects are related and, in each case, the results can be used to each year to serve local communities when those arrangements can be made.” 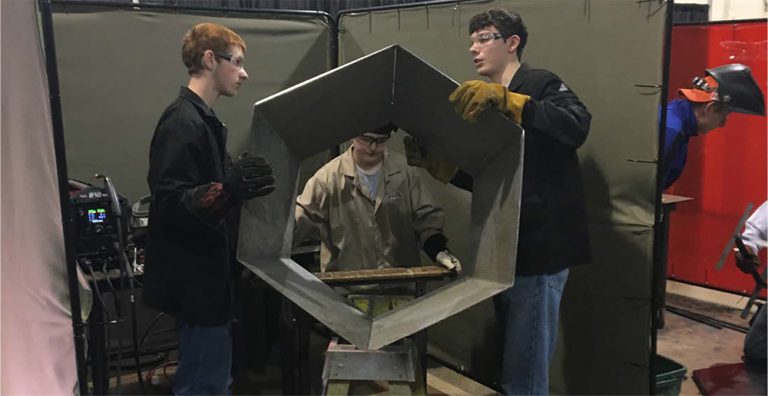 Teams of three students had three hours to fabricate, weld and finish their fire pit from pre-cut parts during the Ohio FFA welding competition.

In addition to practicing their welding technique, the students benefit by applying a more complete set of ‘soft’ skills to the experience, including working together as a team, extensive real world planning and presentation skills and flexing their STEM-related skills to complete the project.

Members of the Ohio committee designing and administering the competition include representatives from the Ohio Department of Education, The Ohio FFA CDE Coordinator and two representatives from Lincoln Electric. The team designated as judges two U.S. Army officers and experienced welders assigned to work at Lincoln Electric for several months as part of the Army’s Training With Industry program.

Each year, the competition begins with the distribution of an RFP (Request for Proposal) to the schools early in the school year in preparation for the actual welding competition to be held the following May. The RFP is a solicitation in which the organizers announce the project requirements and intended use. For 2018, the teams were asked to design and fabricate a fire pit for a local park, using design ideas that reflect the state of Ohio
or FFA. 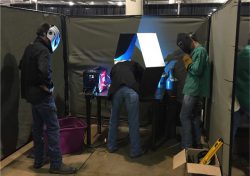 Each team was required to incorporate 5 SMAW welds, 5 GMAW welds and 5 oxyfuel cuts in the design of their project. Welds were performed with a Lincoln Electric POWER MIG® 210 MP welder.

During the fall and early winter months, the teams conduct all of their planning and design, as well as develop a bill of materials. The teams then gather all of this work into formal proposal in response to the RFP request. By January, the team’s response to the RFP, in the form of a detailed portfolio, is due back to the Ohio FFA committee. Based on the quality of presentation and design displayed in the submitted portfolios, twelve schools were selected to move forward to the May welding competition.

Running in conjunction with the Ohio FFA Convention in Columbus, The Ohio Agricultural Mechanics Engineering CDE Project welding competition was completed this past May 2-4, 2018. To prepare for the welding competition, Lincoln Electric personnel served to set up the site, supporting the competition with welding equipment, fume extraction systems and any necessary personal protection equipment.

Each team was asked to add Ohio or FFA-themed design elements into their final product.

Each of the twelve FFA chapter teams of three students had three hours to complete the welding portion of their project. The teams worked in two sessions with six teams in each session. Following the welding period, the teams presented their work to the judges during a one hour period.

The teams are required to incorporate several elements into their project and are graded on the quality of welds and presentation materials.

Judges Jeremy Allen and Josh Toland from the U.S. Army reviewed the 12 entries and heard presentations from each team. After deliberation, the judges announced that the team from St. Henry Consolidated Local Schools located in St. Henry, Ohio had won the competition. 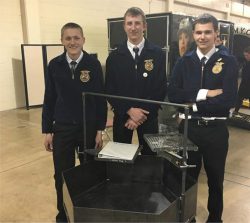 Gandee said, “We know there are several other states interested in designing similar FFA welding competitions. Anytime, you can design a learning experience associated with the way things work in the real working world, allowing students to really apply what they learn at school or in their FFA chapters, you make a more fulfilling experience. This is the kind of event that will leave a lasting impression on those students that participated.”

If you would like to learn more about how to replicate the Ohio FFA team and project-based welding competition in your state, please contact: