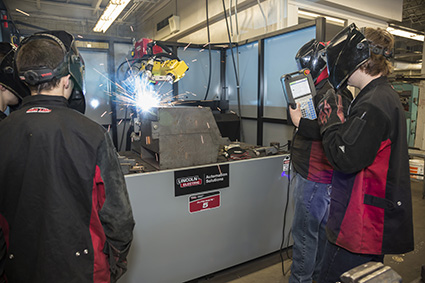 Parma, Ohio, Cleveland’s largest suburb, has been a blue-collar industrial center since the middle of the 20th century. Located along Cleveland’s southern border, Parma has a long history of producing outstanding skilled tradespersons. Recognizing that tradespersons are aging out of the workforce and employers today often struggle to fill open positions with qualified candidates, the team at Parma Senior High School recently launched a welding training program aimed at addressing the trade skills gap issue.

Pat Connelly, welding instructor at the high school, recalls a recent statistic stating that the U.S. loses 60,000 welders to old age and attrition every year. “So there’s a need for them,” says Connelly. “If you look at the career boards, you’re always going to see a need for welders. We still need people who know how to work with their hands. Not everybody is cut out to sit behind a desk for eight hours a day. I think people are starting to realize that now. So that gave us an opportunity to get the program going again. So coming out of a program like this, you’re at a huge advantage. I really think the trades are on an upswing, coming back.”

After only a year, word of mouth at the high school is generating interest in the program. “The students talk,” says Connelly, “and this year, they’re beating down the doors to get in here.” 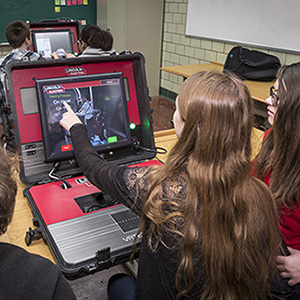 The school also ran a career pathways program at the junior high level during the program’s first year.

Ken Kader will be a senior at Parma High School in the fall of 2016. He enrolled in the welding program when he was a junior – admittedly with nothing more than a mild curiosity at the time, but his enthusiasm has since caught fire. “I absolutely love it, because you make something out of nothing,” he says. “You take the raw materials and you make something yourself. And it makes you feel proud at the end to be able to say, ‘Hey, I made this, and it’s going to perform this function.'”

Ken’s primary interest is in traditional hand welding, but he’s also drawn to robotics applications within the trade. “This is where it’s going,” he says. “There’s still a lot of hand welding, but it’s going to a lot of robotic, automated, so that mass production can be quicker, look better and be more efficient.”

The biggest surprise Ken encountered was the compact size of the Lincoln Electric robotic welding system used in the school’s training program. “I thought it would be a lot bigger,” he said, “and I didn’t think they could fit so much technology and so much power into such a small package, but they can.”

Hands-on experience like this is what makes for an effective welding education program, says Connelly.

“It’s a whole different thing when you get to actually see a CNC plasma cutting torch going up and down and from side to side,” he says. “That really drives home the point.” 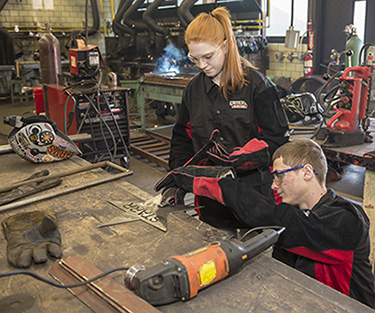 And the addition of Lincoln Electric’s VRTEX® virtual reality welding simulation technology creates opportunities to establish and refine their welding technique even before they enter the booth. “The students can go in and if they’re working on something, if they’re doing a weld, they can go through that weld several times on the simulator before they actually go and perform it out here in the shop,” says Connelly. 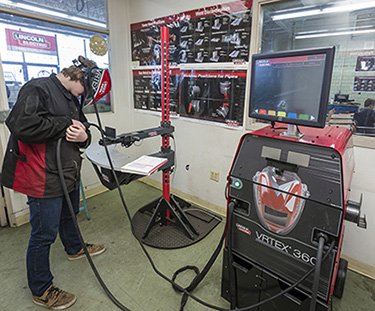 It’s the hands-on, interactive experiences like these that make all the difference in educating the next generation of welders.

“The saying that I always remember is: ‘I hear and I forget, I see and I remember, I do and I understand,'” says Connelly. “I definitely see that happening in here.”