This Erie, Pennsylvania, shipbuilding and repair operation relies on rugged welding equipment to get the job done. The vast Great Lakes waterways serve as highways to swiftly transport goods throughout the Midwest, Canada, the United States and, in fact, the entire world. The eight U.S. states bordering the Great Lakes boast 85 ports to handle freight and passengers, with many freighters and barges tasked with moving limestone, iron ore, grain, and coal. Given the extreme weather shifts, pounding waves and shallow lake bottoms, vessels must be built tough and repaired quickly and correctly to ensure steady, reliable service. That is where maintenance and repair operations, such as Donjon Shipbuilding and Repair, provide a valuable service to the shipping industry.

Headquartered in Erie, Pennsylvania, Donjon opened in December 2009, adding to the salvage, dredging, transportation, demolition, heavy-lift and other marine services offered by Donjon Marine, a longtime Great Lakes maritime business. Donjon’s shipyard spans 44 acres with more than 200,000 square feet of production area, as well as 4,000 feet of pier space. The operation’s dry dock is longer than four football fields − one of only two drydocks on the Great Lakes that’s capable of drydocking 1,000-foot-long Great Lakes ore ships, the kind of self-unloading vessels that traverse these waterways.

“Of the ships entering our shipyard to be repaired, the most recent were built in 1980, with others dating to the 1940s and ‘50s, so they’ve seen several life extensions,” says Steve Konzel, vice president of operations and engineering for Donjon. “They require steel work from the self-unloading system to the hull itself. In addition, the Great Lakes are much shallower than deep seas, so these vessels come in contact with the lake bottoms much more often. That leads to wear and tear on the steel structure.”

As a result, each winter during the ice season, vessels enter Donjon and similar shipyards for repairs.“The majority of our ship repair is 60 to 70 percent steel repair, which involves welding,” says Konzel. “From the new construction side, steel fabrication is easily 60 percent of the entire project cost.” 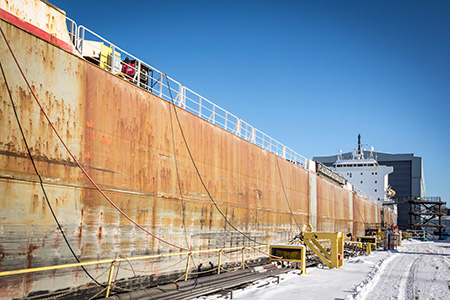 Given the reliance on welding, “we want to have the best equipment to give us the best, highest-quality welds,” Konzel continues. “But we also want, from the performance side, to know that when we go to use that machinery, despite being subjected to the rough environment, it’s going to start and operate reliably. There’s no time for downtime.”

Since the shipyard opened, Donjon has worked exclusively with Cleveland-based Lincoln Electric to install welding robots and other welding equipment for handling steel from 3/8 to 1-inch thick. Donjon employs robotic systems for flux-cored welding of stiffener plates, significantly increasing productivity over manual methods.  Prior to installation of this system, three operators at Donjon would monitor automatic tractors to weld the stiffeners. Today, only one operator is required to monitor the process, with setup four times faster, the company reports. “I generally run the robotic welder, which is a stiffener welder,” explains Scott Akam, a Donjon robotics operator. “It’s a two-robotic-arm system with a gantry added, so it operates essentially as a three-arm setup.

”Other welding equipment employed at Donjon include Lincoln Electric’s Flextec® 450 multi-process welder, used for flux-cored and stick welding as well as air arc gouging. Chosen for its ease of operation and sturdy construction built to withstand the harsh shipbuilding/repair environment, the Flextec 450 features inverter-based technology that results in significantly lighter and smaller units that provide greater energy efficiency than traditional transformer technology. 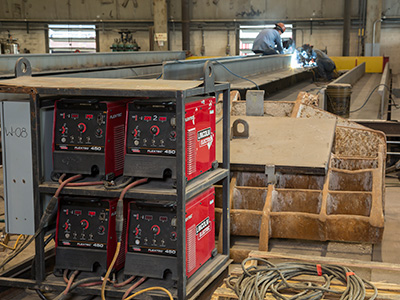 Donjon uses simple-to-control Activ8® wire feeders, also from Lincoln Electric, for flux-cored welding. Small enough to fit through ship manways and light enough to carry around the site, the Activ8 is designed for tough welding environments with limited access, such as those at Donjon. Lincoln’s LN-25 semiautomatic wire feeders also assist with flux-cored welding at the shipyard.

Smooth Sailing Thanks to Donjon Commitment

Donjon Shipbuilding and Repair relies on its welding and fabrication equipment and expertise all throughout the winter, in often brutal conditions, to ensure that shipping seasons go smoothly. Often, winter repair work involves impaired vessel bottoms, where damaged material is cut out, with new pieces fabricated and re-welded back into the vessels. But seemingly seamless waterborne transport shouldn’t minimize the challenges faced in the Great Lakes maritime trade. 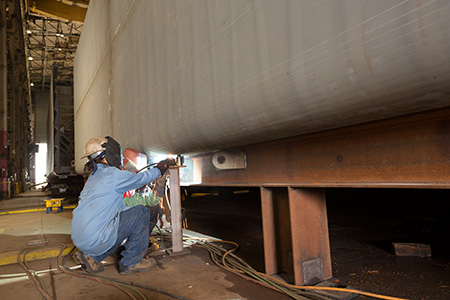 “People tend to take lake shipping for granted, simply because they don’t see it like they see trucks and trains every day,” concludes Konzel. “All the steel for automobiles, for your washer and dryer, your refrigerator, all of that comes from U.S. steel mills, and the ships on the Great Lakes carry all that iron ore from Minnesota down to the Great Lakes-based steel mills. In addition, tankers and container ships on the saltwater side bring goods in from all over the world. Someone has to build and repair all of those ships.”

That’s a challenge that Donjon thrives on.

The Advantages of Great Lakes Shipping
Throughout the Great Lakes, 85 ports provide facilities to handle freight or passengers. Nearly 40 of these each handle more than 1 million tons of cargo, according to recent statistics, and account for 97 percent of total U.S. domestic cargo moved through Great Lakes.  Studies have demonstrated that on average, transportation cost savings to more than $20 per ton of bulk cargo are associated with the use of lakers compared to the next most competitive transportation modes, rail and truck.
Many Great Lakes vessels transport iron ore, coal and other bulk materials, and feature cargo capacities from 20,000 to 70,000 tons. The largest, between 1,000 and 1,020 feet long, may carry 60,000 tons of iron ore per trip. It would take hundreds of rail cars to do the same, making lake shipping a much more efficient and environmentally friendly mode of transport for bulk materials.